I started running five or six years ago, beginning with 5km then building up to 10km, 14km then finally ½ marathon (21km). I was happy with that distance and had no desire to attempt a full marathon (42km). However, there was an Alpine distance event I wanted to do and a trainer friend told me the best way to train for that was to run a marathon.

So that’s what I planned to do. To stop myself from backing out I registered for the Melbourne Marathon early and began the training. The training involved at least two long distance runs a week and being a slow runner this meant my Saturday and Sunday mornings were taken up with running. I often found this difficult and would lose motivation easily and wasn’t enjoying the runs.

However, I kept at it and looked forward to the 18th October, the day of the Melbourne Marathon. I knew going into the run I would not be able to run the whole distance, and accepted that I would be run/walking for at least 5 ½ to 6 hours. Once the run started it took me a few kilometres to settle in and relax, but I was soon enjoying the run and taking in the different parts of Melbourne. I soon started to notice that the runners taking part in the marathon were people of different ages, shapes, sizes and level of fitness. It was great to see so many different types of runners out there putting one foot in front of the other to get to the end. We were all really supportive of each other and encouraging each other as the kilometres ticked by.

My parents met me at the 22km mark with a sandwich to keep me going, as by that stage I had been running for 2hrs 40mins and the sight of them was like a shot of adrenaline. As the course wound through Melbourne, slowly making its way to the MCG and the finish line, more and more people lined the course clapping and cheering everyone, and in some instances offering lollies to give us energy. The last 8km were the longest and hardest I have ever run. From the hips down my feet and legs were incredibly sore and tired and desperate for a long soak in a bath. I found at this stage of the run I was walking more that running but the encouragement from the crowd, other runners and knowing I was so close to the end kept me going.

I was with a tremendous sense of pride and relief I crossed the finish line in 5hrs 19mis. I was so overwhelmed with what I had achieved that I burst into tears, panicking my poor parents who were waiting at the end. Looking back I was able to run for about 80-90% of the marathon and was thrilled with the effort. I would definitely like to do it again next year. 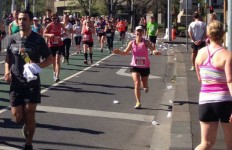 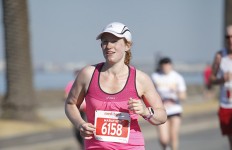 How to Write My Research Paper→