By the time Friday afternoon arrived I was feeling relieved that the wait was almost over and we were underway. I’d spent the previous 3 weeks driving friends, family and work colleagues crazy with my ‘event anxiety’. I’d run in this event once before, so I knew what I was in for. Could I do it again? Could I beat my previous time? I came in second last place last time, could I better that?

We packed the car and headed to Bright where we were staying and then Harrietville for a race briefing where we had our equipment checked and received confusing instructions about creek crossings, warnings about high winds, hot temperatures, and snakes and to make sure we had fresh batteries in our headtorch.

Saturday morning we woke up early (5am) got organised and headed off for the start line at Harrietville. We arrived just in time for roll call and then we were off. 6am is pretty dark and it became immediately obvious that ignoring the warning about fresh batteries in the head torch was a mistake. Somehow I made it through the pre-dawn without stumbling or falling off the edge of the trail, but I was pretty relieved when the sun came up.

The first leg was a solid 12km climb to the top of Mount Feathertop. Not gonna lie – it was tough, but I had a little mantra I kept repeating to myself and made it. I knew it had taken me 3 hours 15 the first time, I’d beaten that by 30 minutes and took that as a win.

I ate a sticky chewy protein bar, and had some powerade and started across the razorback. It’s relatively flat (well, relative to the first leg) but I was tired and sore and there was a lot of traffic on this part of the track. I stopped to have some Panadol and some vegemite sandwich and wondered how on earth I was going to go the distance.

I made it to Diamantina hut at Mount Hotham, the first checkpoint. A really nice marshal helped me by filling up my water bladder and mixing my electrolytes. I was feeling like something refreshing to eat and spied the orange wedges. I started on those, but after 4 I got in trouble for taking too many, (Really?)! I took some Nurofen and was on my way.

This trail is one of the most beautiful scenic places I’ve been in, but it’s difficult to appreciate when you’re focused on foot placement. One day I’ll visit just to sightsee.

The last leg. I’d received a message from Megan as I started down the spur that the first 2km was gruesome. She wasn’t wrong. My knees were screaming for mercy, there were rocks and sticks and leaves and things moving in the grass (I didn’t stop to investigate what they were). Finally the trail flattened out, the Nurofen kicked in and I was feeling good. I had some more vegemite sandwich and checked my watch to see how far I’d come down the trail, it was flat – out of batteries. Megan was done by this point, but I couldn’t tell her how far away I was. I knew the creek crossing was 5km from the end and after running for a while I could finally hear running water. The trail headed down again and the knees cried again for mercy. I eventually got to the creek which was less confusing than it had been described and I was on the home stretch.

The final 5km seemed to go on for an eternity. I started worrying that I’d missed a turnoff or somehow gone the wrong way at the creek. I eventually spied a noticeboard in the distance and nearly cried with relief. I exited on to a bitumen road and could see the finish line, and Megan cheering me on. It was so nice to be greeted at the finish by a familiar face. She was looking fresh and well rested and was so encouraging and supportive. I downed 6 cups of water, had a cool down in the creek and we headed home. 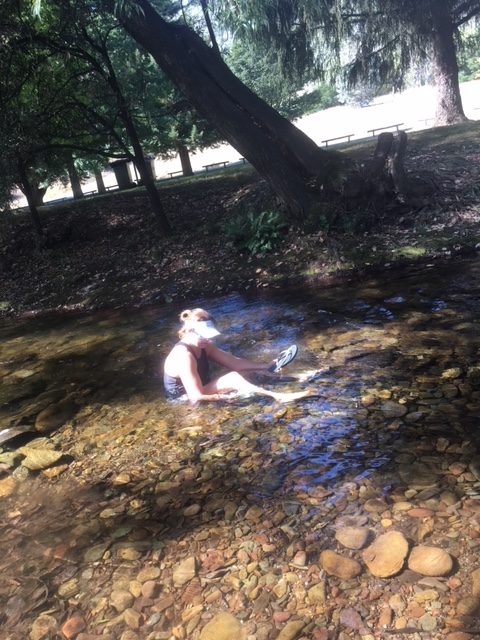 Next up, there’s a plan to go down to Forrest in Victoria to the ‘Run Forrest’ event on the June long weekend. 21km this time with considerably less hills, but a lot more mud. Can’t wait.

Tips to Help You Write Essays→

How to Purchase Term Papers For Sale→

Assist With Your Term Paper Writing→