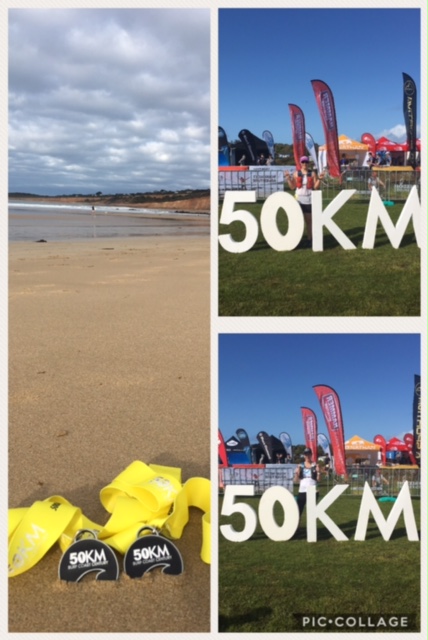 Megan Willson Ultra Runner ……… I quite like the sound of that!

I never would have thought that back in October 2012 when I ran my first 10km event in Melbourne that today I would be able to say I have ran over 50kms.

It seemed like a natural progression to have a crack at a 50km event as I felt after a couple of marathons it was time to step it up.
I absolutely loved my first big trail run last year at the Grampians so I was on the look out for something that was over 42kms and also in a beautiful area.

I’ve always subscribed to the Runner’s World Magazine and low and behold I turned the front cover and there was this full-page ad for the Surf Coast Century 100km in Anglesea Victoria. I had a little giggle as I’d been talking to a girlfriend, who was also looking for a challenge, and it turned out this event was on her actual birthday. She was far from impressed with the distance – she was thinking more along the lines of a 5 or 10km event as she was starting from scratch. So, I thought ‘oh well I’ll just have to do the50km event on my own’. I then happened to be talking to Belinda about it and casually threw in ‘oh you should come with me and do it’. I’m pretty certain her first response was ‘What!! I haven’t even run a marathon’. In my mind that didn’t matter. We’d been running together for well over a year by now and I knew we had enough time to get the training runs in.

So we got stuck into our training – running at least 3 times a week with a rest day in between. We ran around Corowa, Wodonga and Albury. We ran hills and trails as much as we could, along with the long flat rail trail to Rutherglen.

We were thrown into a bit of a spin on the Wednesday before as we were informed we had to take full mandatory gear as there was snow in Ocean Grove! 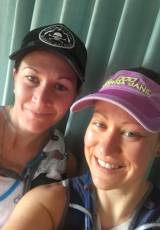 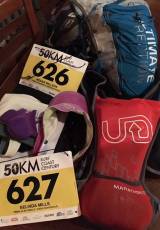 So needless to say we were over the moon to see the sun shining and a bit of cloud cover. We had a good brekky, showered, checked our packs for about the 10th time and headed out the door. We were lucky enough to be staying 500m from the start line so our walk down didn’t take very long. We had one last nervous wee and then headed to the start line.

We started on the beach and unbeknown to us about 500ms in we had to run across the estuary! This of course was 100% not ideal as its not much fun knowing you’ll be running in wet shoes and socks for the next 50kms. So with not a lot for us do about it, we continued on and at about the 2km mark we started to climb.

The course was really well marked out so I parted ways with Belinda and got into my rhythm.

It made me a bit nervous that the first 20kms were reasonably comfy and we hadn’t really hit any big hills. We have since decided that we are 100% no good at reading elevation profiles as we thought the first 30kms would be the hardest! 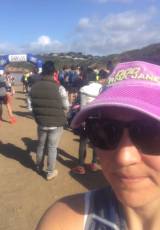 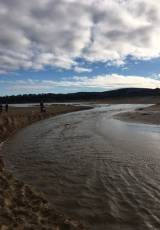 At about the 23km mark it got trickier and that lasted until about the 38km mark. So yep I was correct to be concerned that there was much more to come.

We were running on 4 wheel drive tracks plus a fair bit of single bushland track. Two big stretches were amongst wild flowers and thank god I don’t suffer from hayfever. There were some muddy spots, oh and we had the pleasure of running through another creek at about the 20km mark, just as our shoes and socks were dry. 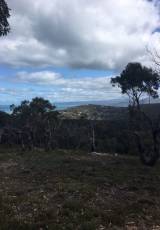 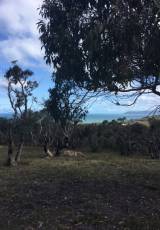 The ‘kitchen’ stops that they had set up for us were amazing. People were there to help you refill your water, home baked treats like oat slice were spread before you, along with bananas, cliff bars and so much more.

At the 38km mark we hit open space which was much needed in my mind. We had to go under a bridge at Airlie’s Inlet and start heading back to Anglesea on the track that ran parallel to the beach.

We headed up a steep little hill that had a big light house at the top, ran past and then headed down the other side. This track then took us to what I think we’d both agree was the worse and hardest part of the course – the beach run!

We both knew it was near the end and neither of us were real keen for it. We had no way to train for this part and the tide was always going to play a big part. I gave up nearly as soon as I hit the beach and started to walk. I took this opportunity to check the app and see where Belinda was up to. I ended up calling her as she hadn’t hit the next check point that I had expected her to be at. Everything was all good for her and she actually had passed that point, it just hadn’t updated on the app. 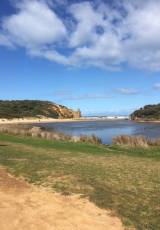 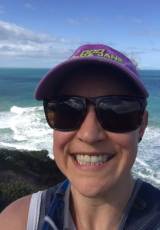 So, I hung up and got my butt moving again. I did walk a couple more times on the dreaded beach but finally I saw the big red arrow leading up to a bucket load of stairs to get me off the beach.

At this stage, I was at 48.5kms so I knew there wasn’t too much further to go, however we had been redirected in an earlier section so we knew we would be around the 52km mark by the time we were finished. I had actually run out of water at the 40km mark so I was quite thirsty by now and just wanted to get it done.
So off I headed on another single track that took us up our last hill, into some more bushland and out the other side, back onto the dreaded beach to then around the corner to the finish line. 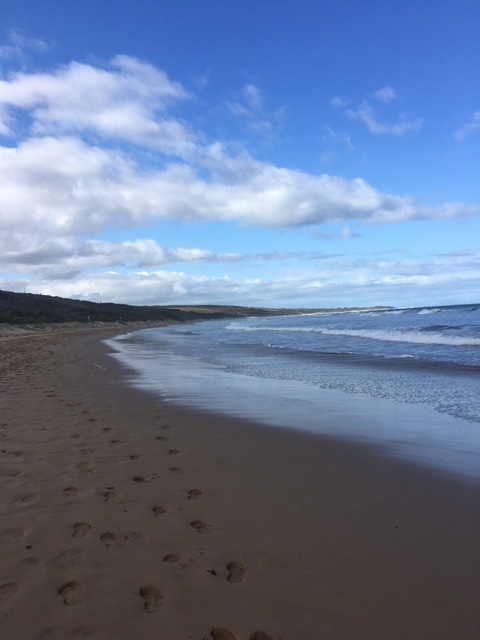 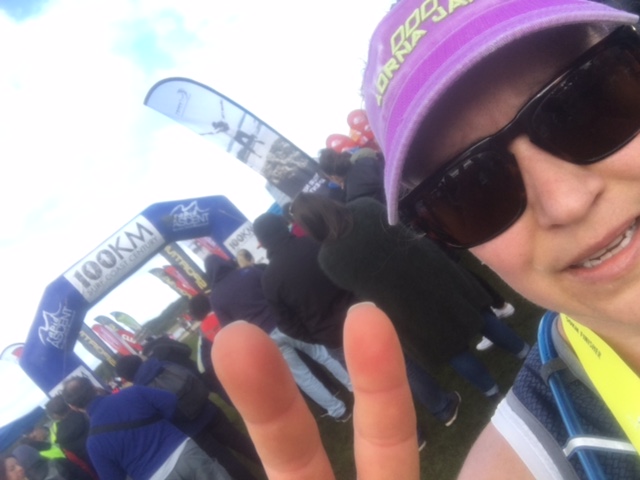 I rang Belinda to see where she was at and let her know that once she was off the beach she only had 3.5kms to go, so get it done.

I got cold quite quickly so I headed to where we were staying, rang my family and had one of the best showers of my life.

My body actually felt pretty good however I knew I had some good blisters on my toes and one black toe nail.

I was pretty thirsty so once I was in warm clean clothes I grab my big bottle of water, a banana and some nuts and headed back to the finish line to wait for Belinda to finish her first Ultra Marathon.

It was an awesome experience and thank you all so much for your support and well wishes before the big event.

I can’t wait to get back into training for my next big challenge! 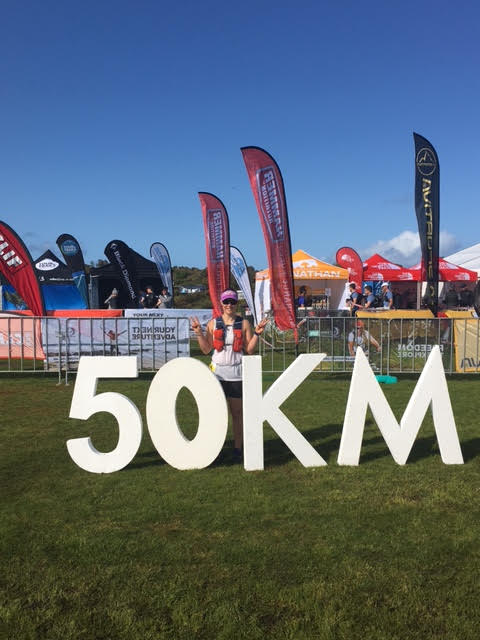 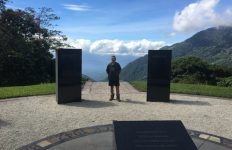 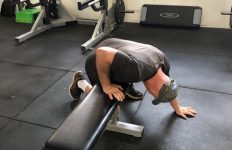 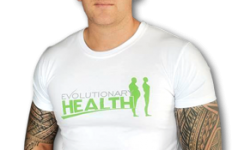 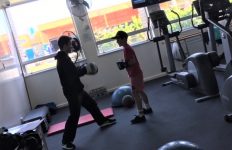