Turn back the clock to 2009. Almost 30kg heavier, largely inactive and lacking direction in my life I discovered the couch to 5km program through an online weight loss forum. Another over weight girl was giving it a shot so I did too. Little did I know that this decision would transform not just my body, but over time, my life. It took me a lot longer than the 9 weeks for the couch to 5km program to get to running 5km straight (more like 9 months!). 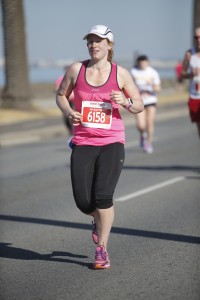 But I persisted. By 2011 I started to run 10km but I didn’t seem to be able to run any further. I kind of accepted that a 60 min 10km was the best I was going to be able to do. I stopped running during my pregnancy in 2012. I made a come back and by the time my son was 5 months old I was back running 10km. In 2013 I did the 12WBT, dropped 16kg and got super fit. I was training 6 days a week but only running about 10km a week. I did a 10km fun run at the end to celebrate and was stunned to cross the line in 53min. This kicked off a running obsession which got my 10km down to 48min and my new goal became a half marathon in 2014. On 01/01/14 I ran the distance in just under two hours and this spurred me on to two half marathons (Wangaratta in February and Mount Beauty in May).

I decided to take the plunge into marathon training due to a lot of encouragement from friends and family, but most importantly my husband’s commitment to helping me find the time to train. I am not going to say that it’s the hardest thing I’ve done, because its not. Life throws many challenging at you that are a lot harder than this. But it isn’t the easiest thing I have done either. Five to six hours a week running, while studying, working and parenting is no easy task. Some weeks I missed more than one training session, and my time spent building strength was limited. It was not, by far, a perfect lead up to the big day. The big day was the Melbourne marathon on 12/10/14. It was such a buzz to take on the full 42.2km with over 7000 other people. It was hot, it was hard, I cried but I didn’t consider giving up. Crossing the line was truly an emotion experience, but I’d say the most emotional point was getting to the start line in the first place.

I want to share my story to inspire others, to say if I can do it I truly believe that anyone can. The size and shape of your body is irrelevant. Your history of exercise is irrelevant. The key to getting to that start line is all in your head. If you believe you can do it, you can. In running I found confidence, friends, health and vitality. The more I put in to it, the more I got back! Happy running! 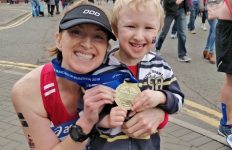 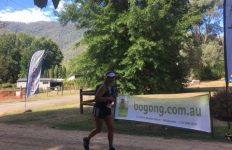